During our 3 day trip to Fraser Hill, there was no doubt that we were going to head out to explore and discover the creatures of the night. Our goal was to look for the 3 species of Tarantulas that Fraser Hill is known for, mainly from the Coremiocnemis Genus. They are Coremiocnemis hoggi, Coremiocnemis cunicularia and Coremiocnemis obscura (ranked in order of rarity). To sum it all up, we had a pretty productive trip, scroll down for more photos and a video! 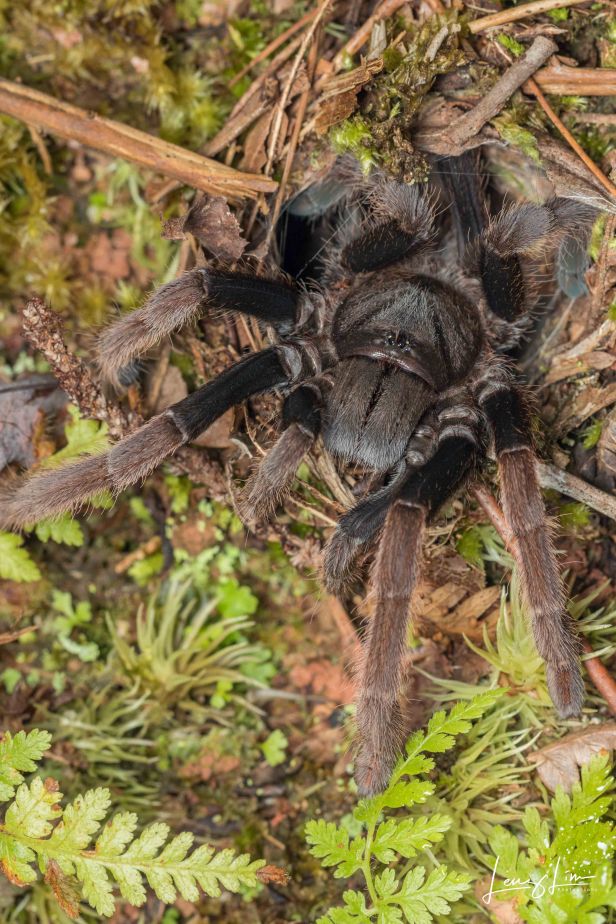 Being a nocturnal species, Tarantulas are more active at night, look carefully and you just might spot some long hairy legs sticking out of a hole. In the day, these burrows would just appear to be plain, empty holes in the ground. Take a look at some of my shots of these arachnids in their natural environment~

Some of these photographs are light 2 image stacks.

Disclaimer: Locations for macro shoots would not be disclosed to protect the arthropods from poaching. 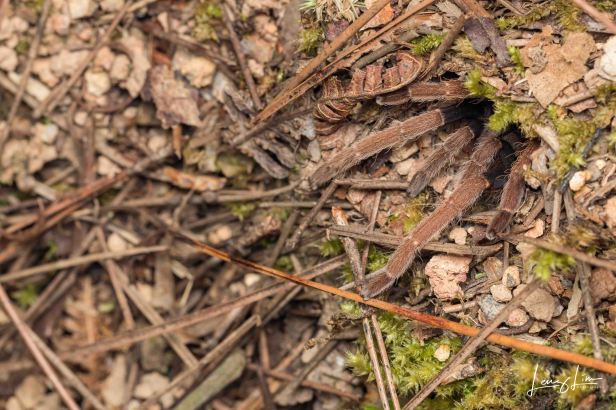 Look at how the colours blend in with the environment! 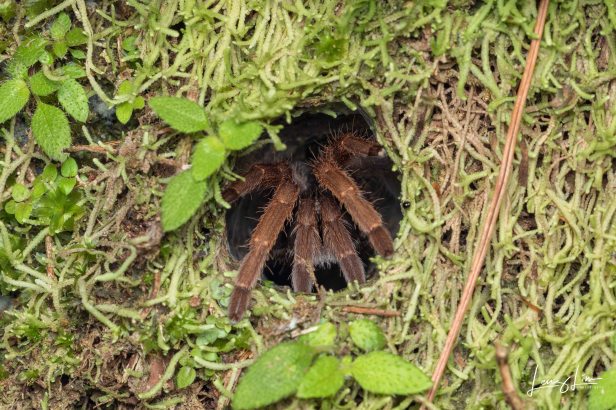 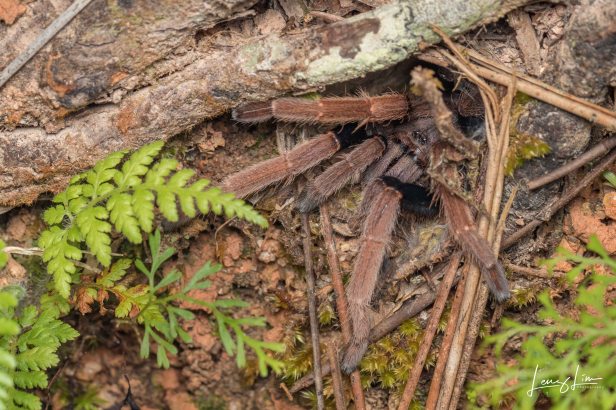 Tarantulas whether they are arboreal or terrestrial species are ambush predators, waiting in their burrows for crickets, roaches or even small mammals like mice to come along. These spiders have poor eyesight but that does not stop them from being formidable hunters, the tiny hairs that cover their body are hyper-sensitive to the surrounding environment, sensing and feeling out any vibrations close by. Once the potential prey comes close enough, Tarantulas strike with insane speed and accuracy (arguable haha), injecting venom from their large fangs. 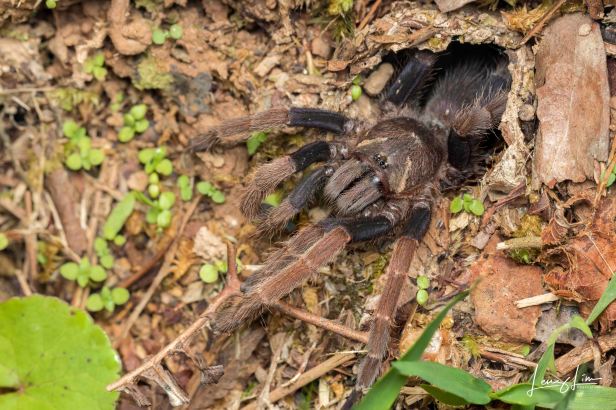 “Tarantula Fishing” (not an official term) is essentially teasing the arachnid out of its burrow using an object like a stick or blade of grass. When coaxing, think “cricket” and gently brush along the parameter of the burrow and you will see the Tarantula slowly creeping out of its burrow, waiting to strike. Some species are more skittish than others and would not stay out for long once out of its burrow, take a video that you can review later for your own purposes. 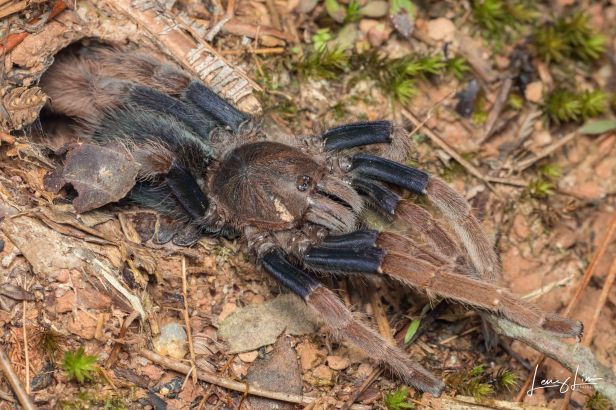 Look at that deep purplish-blue colouration! Coremiocnemis hoggi can be identified by the two hind legs that are “bushier” than the other legs. This was also the first shot I took where the entire spider came out of its burrow. Its sheer size was astonishing. 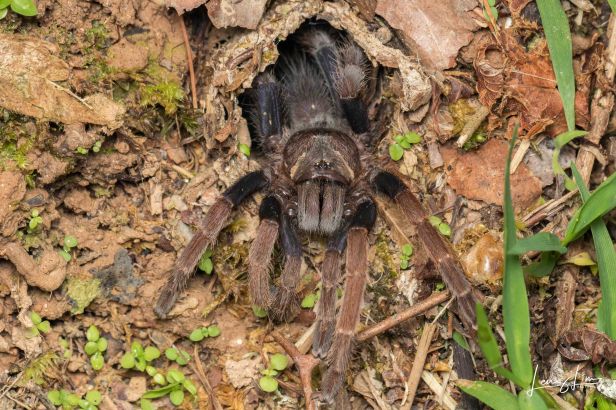 This is a widely known method used by biologists, scientists, hobbyists and photographers/film makers (just to name a few), for a myriad of purposes like observation, documentation, research etc. Do note that the spiders are not harmed in any way and this is just part of their natural behaviour. Needless to say, continuous attempts to coax the same spider out from its burrow would cause unnecessary stress to it and it would probably just stay in the burrow and ignore you. 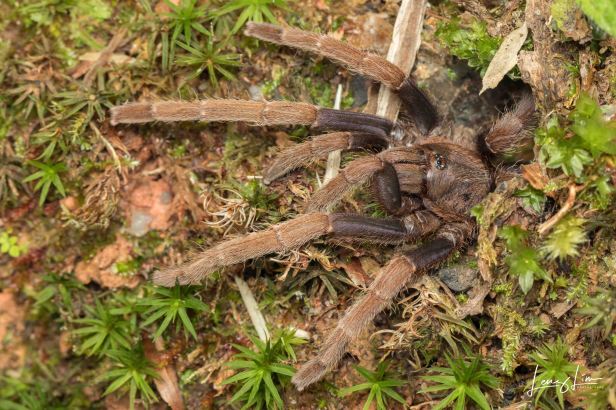 One of my favourite shots from the trip! 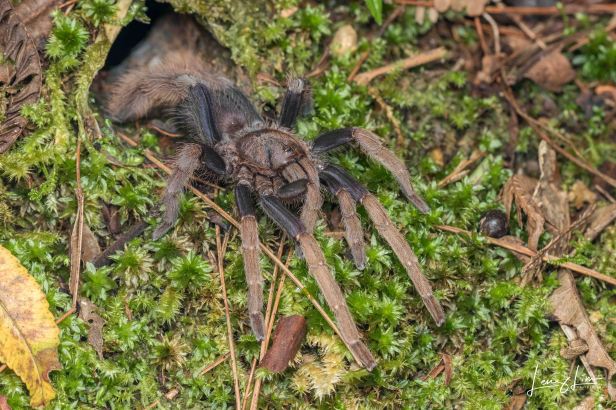 Entire spider out from its burrow.

Fun fact: This species of Tarantula is named after Stephen Hogg, a.k.a. the Stephen of Stephen’s Place in Fraser. He observed and documented these spiders years before they were officially described.

Another method people use to coax the spider out from its burrow is the “flooding method” where a low pressure stream of water is introduced into the burrow and the spider will naturally exit the burrow. I’ve seen people do this to rehouse their Tarantulas at home and it seems pretty effective (we did not do this). 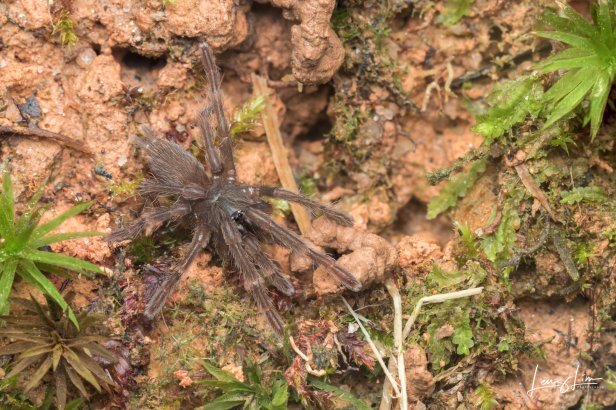 There is definitely a healthy population of Tarantulas in the area we found them. Burrows were rather close to one another and we saw many slings (lingo that refers to baby spiders, or early instars). Juveniles are hard to ID as they mostly look similar but this one is probably hoggi. 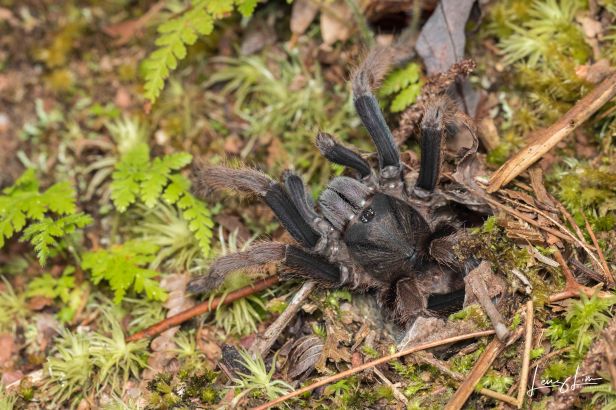 Another species known to be found in this area is Coremiocnemis cunicularia and it has a pretty similar colouration to hoggi but does not have the bushier hind legs. This particular individual has a really dark, black colouration and its a possible cunicularia. 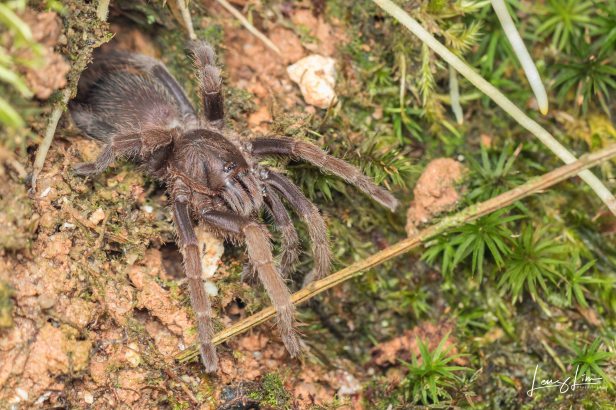 This species is rather uncommon as compared to hoggi and we probably only encountered only 2-3 of them. Some Tarantulas stayed in their burrows and some did not come out enough for us to get a positive ID. 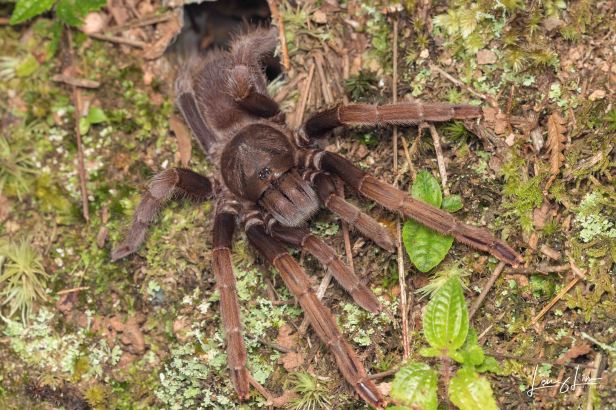 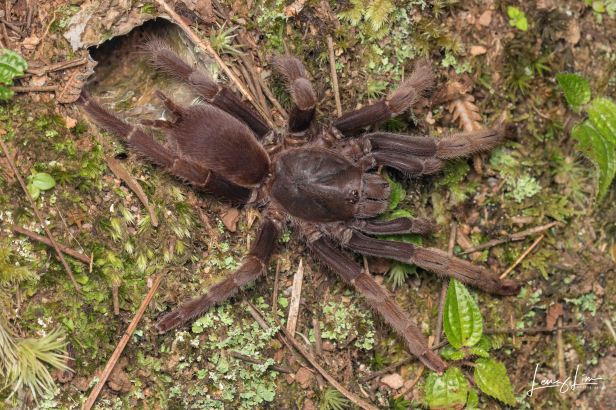 Still awaiting a positive ID of this one, but it could possibly be the rare obscura. The temperament of this individual was so different from the rest. It was daring enough to grab onto the stick, refusing to let go and kept its pursuit. Watch the video I compiled below to see what I mean! 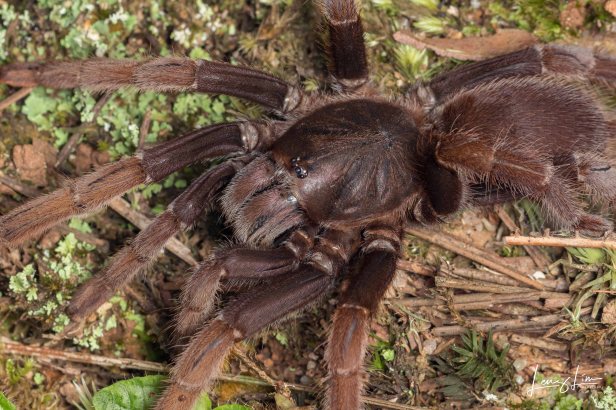 Being the largest spiders in the world, they inject fear into the majority of people, but do know that although they inflict a painful bite, their venom is not potent enough to kill and is only comparable to a bee sting. As long as you keep a distance and respect the arachnid, you would not be harmed!

Watch the simple video compilation I did to show you how these shots were taken. Disclaimer: I had no intention to do a video in the first place so you could probably tell its pretty messy~ video is unlisted on Youtube. 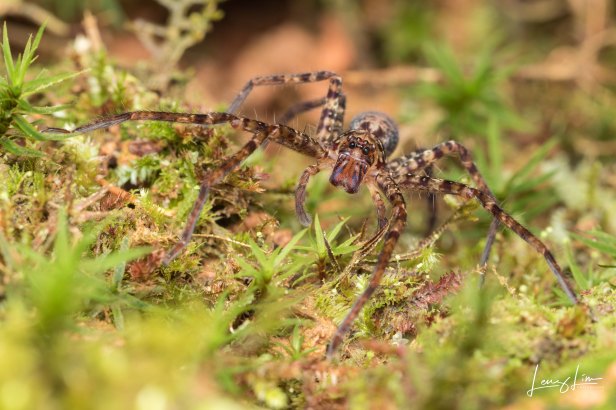 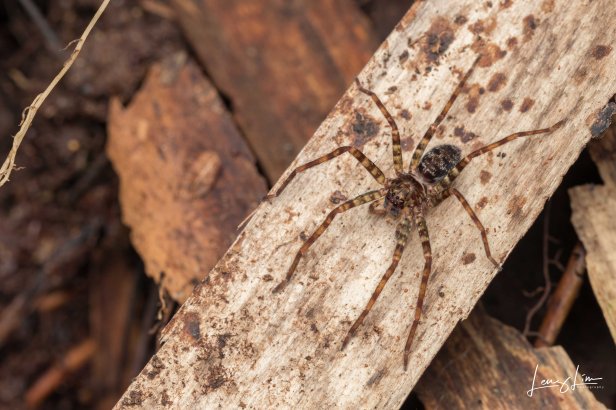 The Tarantulas shared this wonderful habitat with other spiders like the Huntsman Spider you see above. I could not find an ID for this one but it has a gorgeous pair of chelicerae. Black stripes and a dash of blue in front? I’ve never seen that before on a huntsman. Do dm me if you know huntsman this is! 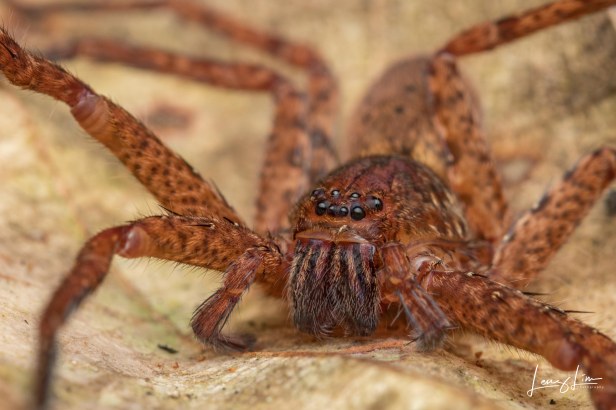 This one had an overall redder coloration but with similar chelicerae. Possible Lunula? 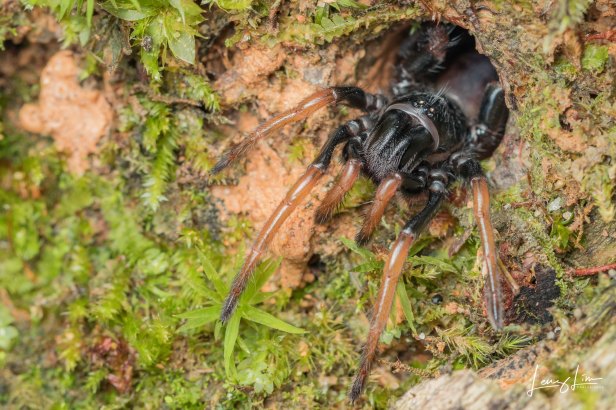 Other interesting ambush predators you can find there are the Funnel Web Spiders, much smaller in size than the Tarantulas with smaller burrows. These guys are way more skittish and don’t stay out at all, at most a second or less. 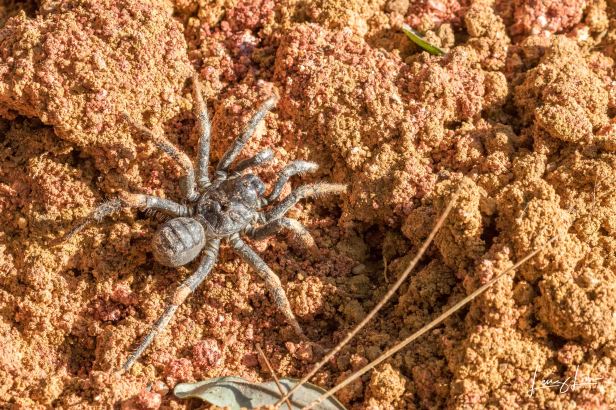 Lastly, the elusive Malaysian Black Trapdoor Spider (Liphistius malayanus) can be found in that area as well. It is one spider with a really unique round abdomen! This specimen was not extracted from its home, but instead, this was just a really unusual and pretty sad sight to see.

You will rarely find Trapdoor Spiders out of their burrows especially in the day, they cannot survive in hot temperatures and stay in their burrows to keep cool. We chanced upon this huge Trapdoor Spider crawling and tumbling across this sandy slope in the scorching Sun with no burrow in sight when we were birding in the morning (this was shot with a telephoto lens). Naturally we returned to the location at night and found that this individual had been crushed along the roadside, probably a victim of roadkill.

If you want to see how the trapdoor hunts and how its home looks like, check out this video done by bugsnstuff on Youtube.