All wildlife photographs were taken with the Canon EOS 7D mark ii and the Canon EF 100-400mm f/4.5-5.6L IS II USM Lens. All rights reserved.

Sometimes, you may find subjects at the most unexpected places and unexpected moments. We visited the Waiotapu Thermal Wonderland to see the Lady Knox Geyser and to learn about the geothermal activities that was going on in Rotorua. Look at the shot below, find anything? 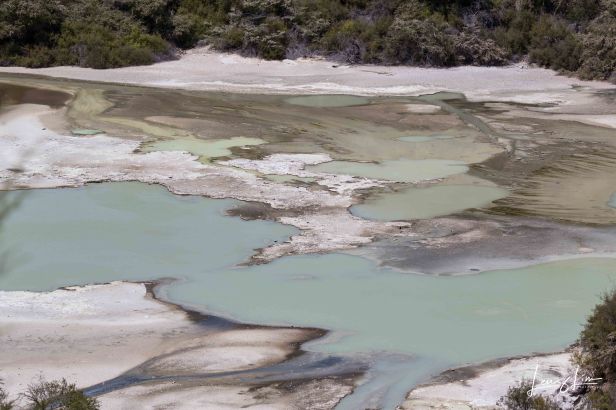 Let me help you out!

These little guys were so far away and well camouflaged that I only realised there were chicks when I zoomed in to check my shot. Aren’t they cute! Once again, you have to stay on the boardwalk (to prevent yourself from getting thoroughly steamed) and there was no way to get any lower…

This was hands down the most challenging species I encountered. These fantails move so quick and hardly stay put for more than a second. Couple that with the fact that they were always too far away, darting in and out of bushes in low light. To my knowledge, there are different morphs of Fantails in NZ, mainly the pied and dark morph. But one things for sure, once you see that signature tail, you’ll know you’ve spotted one!

Weather was pretty unpredictable during our trip and there was once we were just relaxing in the campervan at Tauranga Tourist Park before our Glowworm Kayak Tour that same evening. We were parked right next to a wetland and check out what I spotted!

Two hungry Sacred Kingfishers taking turns to hunt small crabs in the mud. They always returned to the same perch and i’m so glad to have braved the rain to document this hunting behaviour. Flight shots turned out pretty decent as well! Light was terrible though… 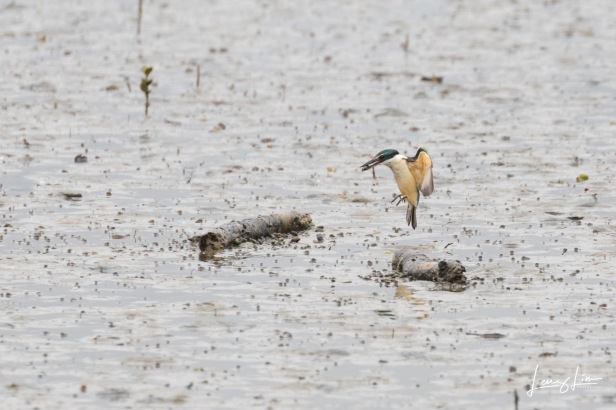 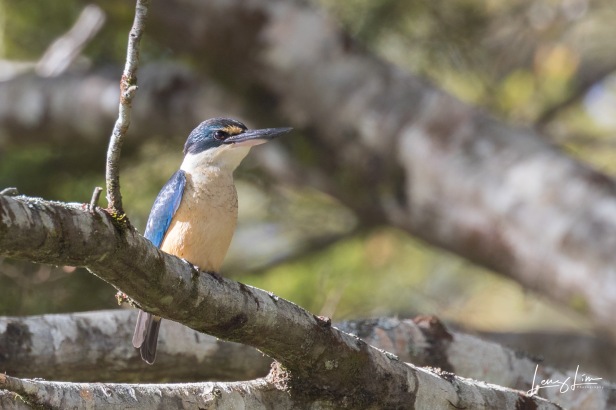 Even further away from the kingfishers, I didn’t have much luck on getting any nicer images than this one.

Largest bevy of Black Swans I’ve ever seen. Photographed near Pukeni Holiday Park at a place we stopped to have some fresh oysters.

If you’re a bird lover and visiting the North Island, you MUST visit the Muriwai Gannet Colony, just about an hours drive from Auckland. Thousands of Australasian Gannets breed there from August to March each year and you can get up real close to the colony. During my time there, I decided to document their behaviour in a series of photos. 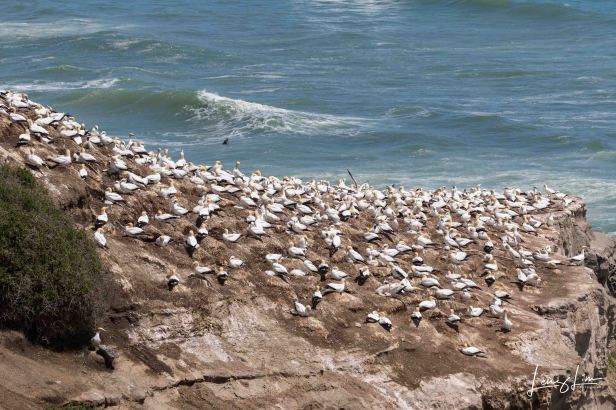 The main colony area is just a short walk from the carpark and theres another vertical sided island just out at sea that hosts more breeding pairs (2nd image). These large birds (~2m wingspan) nest extremely closely to one another!

First few Australasian Gannets that greeted us during the short walk to the colony. Perfect place to practice some flight shots! Light was really harsh and those shadows really killed many of my shots. 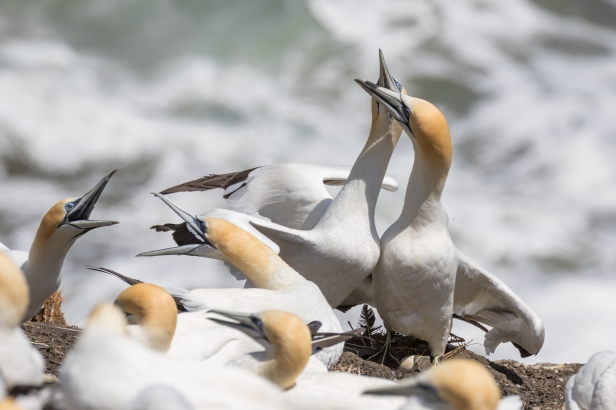 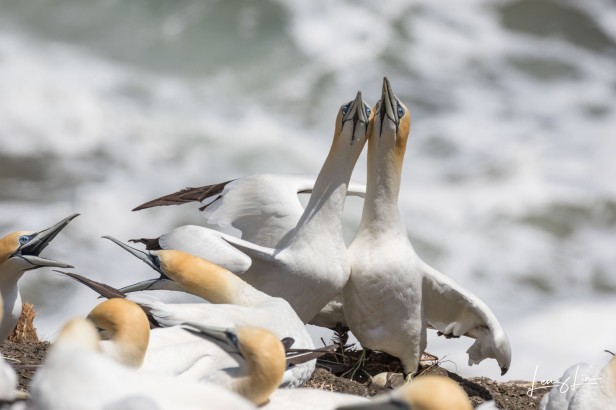 These birds perform elaborate greeting rituals by stretching their bills and necks skywards and gently tapping bills together. The males however, are highly territorial during nesting and mutual bill fencing was often seen. Really love the second shot cause they look so goofy!

Couples usually stick together for a couple of mating seasons! 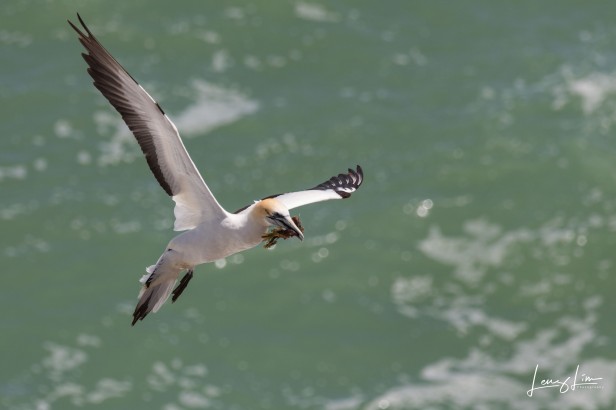 From the onset of breeding, the male brings nesting material such as brown algae Carpophyllum, which he retrieves from the shallows. Both members of the pair form and maintain the nest mound, particularly when the surrounding ground is soft from rain.

The Gannet then lays a single egg and can only successfully incubate one egg over a period of approximately 45 days. Both sexes share the incubation duty, and later brood the chick on the top of their webbed feet.

Chicks would fledge, leave the colony and cross the Tasman Sea to Australia when they are about 100 days old. They only come back after 3 years to secure a nesting site~ 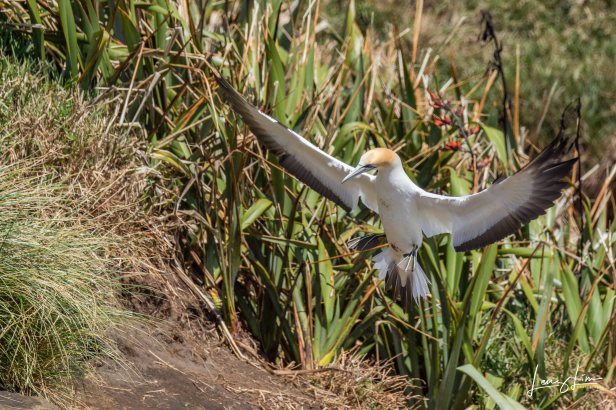 These birds are plunge divers and spectacular fishers. They then feed their young by regurgitation. Didn’t manage to see any of that due to the time constraint but definitely worth the trip there to witness a massive colony of Gannets with my own eyes and through my lens. Only wished that I had more time and better light to work with.

Besides the Gannets, breeding White-fronted Terns share the location as well.

These terns are built for speed and superior manoeuvrability. Small fish have no chance against this dive-bomber. 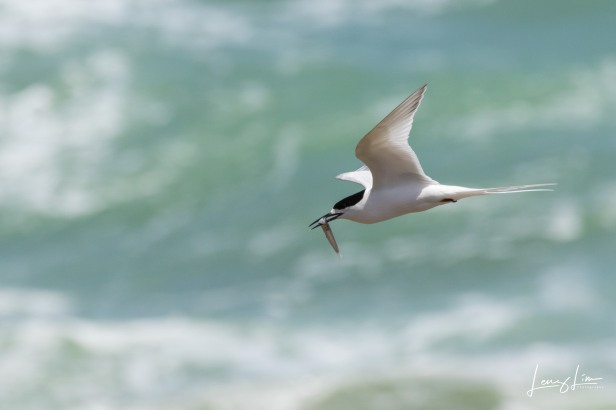 After fishing, they fly back to their nests to feed their young. The terns were situated much further than the Gannet colony and all the photos are heavily cropped. 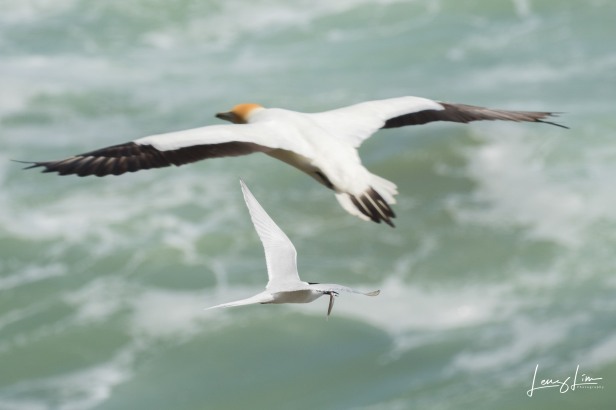 Size comparison between the two species.

Lastly, a gorgeous endemic bird that I have a love-hate relationship with, the famous Tui (honeyeater)

These honeyeaters are found in both the North and South islands and look absolutely exceptional. They have nice glossy feathers and that unique tuft of white feathers on their chest. I only saw 3 of them in total and the conditions were never right for a good shot. The second image was shot at the Auckland Zoo and even then, the harsh light was unforgiving.

So that mostly sums it all up, 3 weeks touring the North and South Islands. We saw many other species along the long drives but I’m happy with whatever I managed to see and capture. Didn’t have much expectations to get many shots but it seems like I had a really productive trip!